I said goodbye to Brazil at August 20th, 2017. The farewell was not easy, because I had never lived abroad before and I am not the kind of person who hates her country. I love my Brazilian friends, family, boyfriend, waterfalls, beaches and food. But a bigger purpose called me, and I caught the plane even with the blurry view. During the flight I had a very good reception, I was well treated by the stewardesses and all the attendants. My first stop in Europe was in Paris, where I was quite lost at first, but I managed to find my gate and finally arrived in the Netherlands.

Impressed with the quantity of places for suitcases unloading, I got lost again and had to ask for help. The first contact with a Dutchman was interesting. The man laughed at my confusion and helped me with kindness, explaining where I should go. They have an ironic sense of humor that pleases me. When I reached the right row, I found my two suitcases, weighing about twenty-eight pounds, one of which was opened. If the ESN staff members haven’t helped me to get from Amsterdam to Breda in these hard conditions, I would not have arrived so easily.

I was very well received in a simple but beautiful Dutch house, and here I am for 3 weeks. There are many things to do at the arrival of the Netherlands: leave your documents in the University, make a Dutch account to save Brazilian bank fees, arrange a meeting with the city hall to ask for a residence permit and get the residence permit in one of the cities which they select.

By now, I have had a wonderful stay, meeting people of various nationalities: Dominicans, Chinese, French, Italians, Spaniards, Germans and, of course, Dutch people. The Netherlands is one of the countries in the world with the largest English-speaking population, and therefore many students come from all over the world, which allows all this cultural exchange.

Shopping is a bit tricky, because Dutch language is difficult even for the google translator. But with the willingness of the attendants we can always find what we want. Cycling all the time is almost a rule here, with thousands of people cycling here and there all the time. It is only now that I live in the Netherlands that I realized how good this habit is for traffic, for nature and for ourselves.

Everything here is beautiful. Well, at least Breda, Rotterdam and Den Bosch, the cities of the Netherlands that I've had the pleasure of meeting. Being here seems like a dream becoming true every day, and I hope learning a lot from this wonderful country and my studies at AVANS. 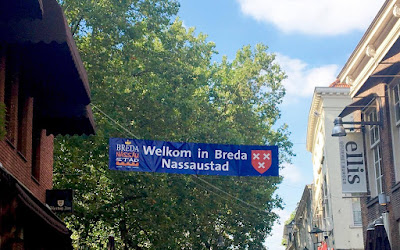